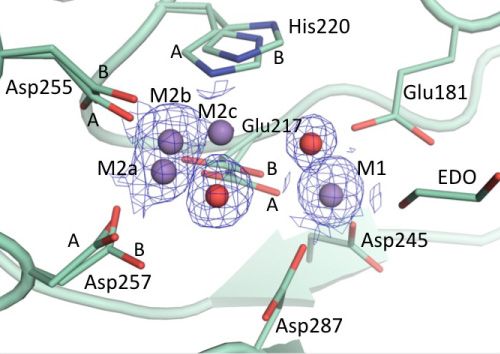 Xylose isomerase (XI) is an industrially important metalloprotein studied for decades. Its reaction mechanism has been postulated to involve the movement of the catalytic metal cofactor to several different conformations. Here, a dose-dependent approach was used to investigate the radiation damage effects on XI and their potential influence on the reaction mechanism interpreted from the X-ray derived structures. Radiation damage is still one of the major challenges for X-ray diffraction experiments and causes both global and site-specific damage. In this study, consecutive high-resolution data sets from a single XI crystal from the same wedge were collected at 100 K and the progression of radiation damage was tracked over increasing dose (0.13–3.88 MGy). The catalytic metal and its surrounding amino acid environment experience a buildup of free radicals, and the results show radiation-damage-induced structural perturbations ranging from an absolute metal positional shift to specific residue motions in the active site. The apparent metal movement is an artefact of global damage and the resulting unit-cell expansion, but residue motion appears to be driven by the dose. Understanding and identifying radiation-induced damage is an important factor in accurately interpreting the biological conclusions being drawn. The work was published as “Structural knowledge or X-ray damage? A case study on xylose isomerase illustrating both”  by Helena Taberman, Charles S. Bury, Mark J. van der Woerd, Edward H. Snell
and Elspeth F. Garman in the Journal of Crystal Growth.