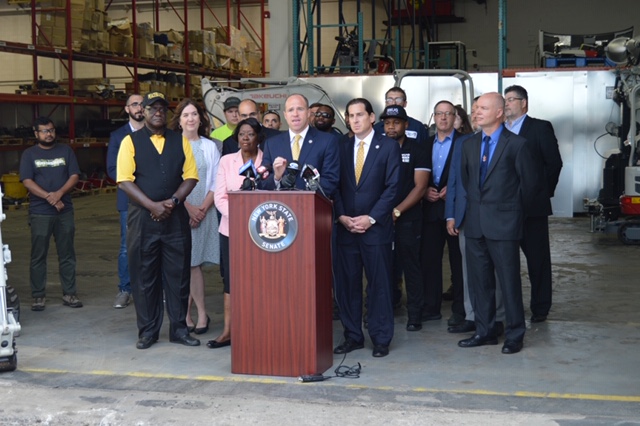 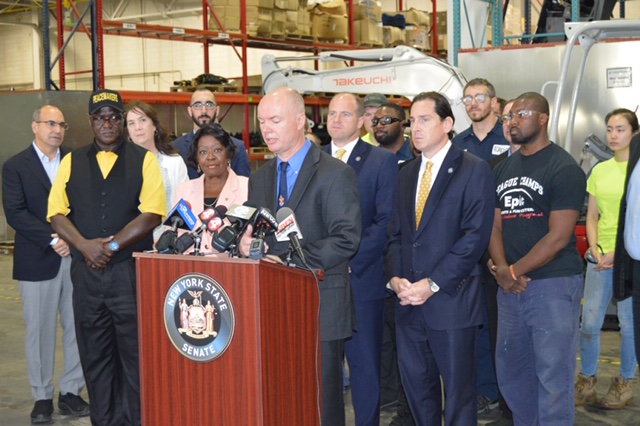 ​New York State Senator Tim Kennedy (D-Buffalo) was joined by Senator Todd Kaminsky (D-Long Island), Chairman of the Senate Environmental Conservation Committee, as well as Assembly Majority Leader Crystal Peoples-Stokes at the former American Axle site on East Delavan Avenue Thursday to discuss groundbreaking green technology developed at the site that will soon be making its way to the Hauptman-Woodward Medical Research Institute (HWI). Lithium battery storage technology developed by Viridi Parente will be used to support the high-powered, state-of-the-art Cryo-Electron microscope being installed at HWI’s facility on the Buffalo Niagara Medical Campus. The microscope’s use of an on-site lithium storage system is the first of its kind in New York State. The microscope has the ability to fast-track medical discoveries, greatly shortening research timelines.

The microscope has an extremely high energy demand. The use of an on-site lithium storage device will help HWI realize significant cost savings by lowering electricity demand and reducing costly infrastructure upgrades, while also easing the burden on the Medical Campus’s electricity supply. Due to its unique nature, this lithium technology has not been used in New York State before. As a result, with Senator Kennedy and Majority Leader Peoples-Stokes’ assistance, HWI had to secure a variance from the New York State Department of State.

“This is the quintessential Buffalo story,” said Senator Kennedy. “A polluted brownfield site is being brought back to life as a clean-energy hub, creating new jobs and supporting one of the most important additions to Buffalo’s economy in decades: the Buffalo Niagara Medical Campus. Jon Williams and his team at Viridi Parente believe in this city and in its future as an innovation canter, and through their tireless dedication, we’re seeing incredible momentum in technology and green energy industries. We also owe a debt of gratitude to Dr. Edward Snell and the amazing minds at Hauptman-Woodward, whose vision for the future of the Institute is quickly becoming a reality.”

“The work being done by Viridi Parente is emblematic of the entrepreneurial spirit that New York State is going to rely upon to meet our aggressive energy goals to combat climate change,” said Senator Kaminsky. “Not only are they advancing energy storage technology on a brownfield site, they are creating jobs and supporting the growing medical research economy of Western New York. I applaud Viridi Parente and HWI for their forward thinking vision, and I look forward to hearing of their future developments.”

“This partnership between Viridi Parente and the Hauptman-Woodward Medical Research Institute is a shining example of the amazing potential of state-of-the-art technology being developed right here in Buffalo,” said Majority Leader Peoples-Stokes. “The lithium battery storage technology being developed by Viridi Parente at the former American Axle site, along with HWI’s Cryo-Electron microscope, will help create advances in the medical field, as well as jobs for Western New York.”

The Cryo-Electron microscope flash-freezes proteins in motion and the uses beams of electrons to visualize what those proteins look like. This allows them to more quickly develop life-saving pharmaceuticals. The installation of this microscope will be a magnet to recruit top research scientists as well as attracting new employers to the area. However, a consistent and reliable supply of energy is pivotal to the project’s success. The use of Viridi Parente’s technology will deliver the needed solution. The lithium storage device will draw electricity from the grid during off-peak times, when demand and costs are low. During higher usage times, the microscope will draw upon the stored power, providing an uninterrupted and clean source of electricity. HWI has received significant funding from New York State, including a $1.2 million grant from Empire State Development and $1 million from the New York Power Authority.

“The Cryo-electron microscopy center that HWI is developing will permit researchers in Western New York to advance their study of life and disease like never before, taking discoveries that can impact our children, to ones that may impact us in our lifetime. Combining the progressive efficient green energy solution developed by Viridi Parente with the disruptive technology behind the microscope and the transformational work of HWI’s researchers will help bring both groundbreaking medical discoveries and economic benefits to the region,” said Dr. Edward Snell, CEO, Hauptman-Woodward Medical Research Institute. “This is the same type of thought leadership that put Buffalo at the center of electricity innovation more than a century ago, and it is equally exciting. The partnerships that this project creates will only help grow the overall impact and success of the Buffalo Niagara Medical Campus.”

“The technology we are developing here on Buffalo’s East Side does more than fit squarely within the renewable energy vision articulated by New York State, it places Buffalo at the leading edge of renewable energy development,” added Jon M. Williams, Chairman and CEO, Viridi Parente. “The fact that this breakthrough technology is being developed on the East Side and will see its first application just minutes away on the Buffalo Niagara Medical Campus, where it will support the innovative research taking place at Hauptman-Woodward, is a victory for the entire region and for the resurgence of the East Side. It is also a testament to the leadership of Senator Kennedy and Majority Leader Peoples-Stokes, who have fought every step of the way to make this possible.”